During the past year a committee of volunteers, working under the auspices of the Smyrna Arts & Cultural Council’s History Committee, met on a regular basis at the Smyrna Public Library to examine the back issues of the old Smyrna Herald and Smyrna Neighbor newspapers, published between 1962 and 1994, with the goal of photographing significant images that appeared in those papers with a cell phone camera, and thus adding to the total store of the community’s historical images. By virtue of this project, hundreds of new pictures were added our photographic master file, which now contains a total of  than 1400 images, the most interesting of which were rephotographed with more sophisticated equipment and improved by the use of photoshop software.

The following individuals worked on this project over a period of many weeks.

On Sunday, March 5, 2017 a “Recent Photographic Acquisitions” program was presented at the Smyrna Public Library in one of the library’s regular “First Sunday of the Month” lectures, narrated by historian Bill Marchione.

Here is a small sample of some of the historic that were retrieved from these newspapers. 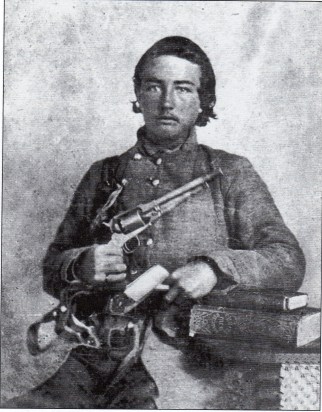 John Gideon or J. Gid Morris as a Confederate soldier, in 1865. Morris would later serve as mayor of Marietta and then Smyrna. He owned and operated Belmont Farm, a 200 acre property at the intersection of Atlanta Road and Windy Hill Road where he experimented in advanced agrictultural practice and raised poultry and prize livestock. The picture to the left was submitted to the Smyrna Herald in 1962 in a competition to submit old photographs; that to the right was taken from an on-line obituary notice for Mr. Morris.

An antique photo of the Gann House, one a handful of standing pre-Civil War structures in Smyrna. The details on the history of the house appearing in the caption are inaccurate.

The Smyrna High School student body and faculty in 1907 when the high school was still operating out of the of Smyrna Academy building. The photo was taken on the steps of the nearby Smyrna United Methodist Church.

When the 1884 building housing Smyrna’s First Baptist Church burned in the 1920s, the congregation bought a lot at the corner of Church and King Street for the construction of a new edifice. Here we see a gathering of church members preparing to clear this lot so construction of the new building, the so-called Stone Church, could begin.

This interior view of Pace’s Drugstore, located at the southeast corner of Atlanta Road and Spring Street, dates from 1926, and shows the owner Dr. Pace, the town’s sole physician, and a former mayor, in the forefront, with the pharmacist, T. Y. Westbrook (left rear). Here occurred, on May 19, 1918, an incident involving a protest by African-American World War I veteran’s against segregation in the commercial facilities of the city. For more details on this incident see Marchione, A Brief History of Smyrna, Georgia (History Press, 2013), pages 100-101.

Here we see Mr. & Mrs. A.C. White and their child in a newly purchased 1911 Baby Maxwell automobile, which Mr. White had just purchased for his rural mail route. Only a handful of Smyrna residents owned automobiles in 1911. 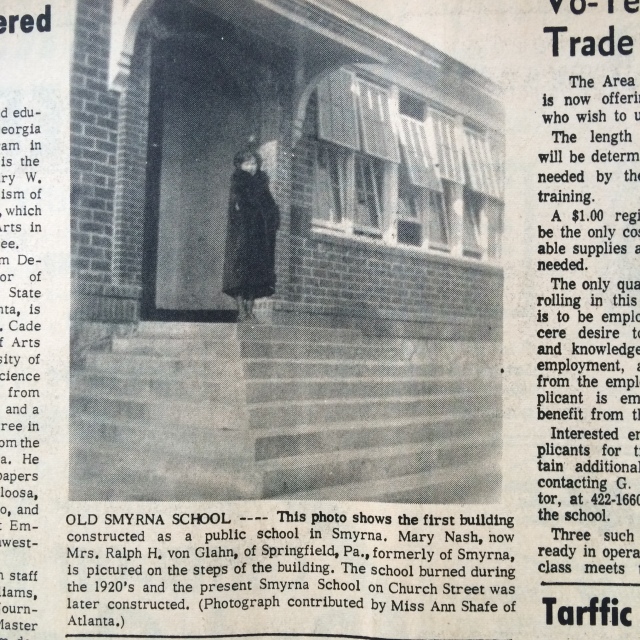 As the number of commuters residing in Smyrna increased in the 1905 to 1929 period (a by-product of the installation of a streetcar line linking Downtown Atlanta to Marietta Square), municipal services were had to be expanded. This included the construction, in 1920, at considerable expense, of a state-of-the-art elementary school. Unfortunately, this modern building burned in 1924, whereupon the city reconstructed the building. The city borrowed $50,000 to construct these buildings at a time when its annual budget was less than $10,000. Here we see a rare photograph of that original 1920 school building.

This photo shows the portion of Church Street lying opposite its intersection with Memorial Place. No date is provided in the caption nor are the owners of the houses identified. These buildings, which no longer stand, the caption tells us, occupied the acreage on which the historic Smyrna Campground Brush Arbor once stood.

In this 1930s photograph we see the mechanics and laborers that were employed at D. C. Osborne’s Garage on Atlanta Road in downtown Smyrna, one of seven gas stations/ garages located in the downtown at a time when Atlanta Road formed part of the heavily traveled inter-regional Dixie Highway.

The establishment of the Bell Bomber plant in nearby Marietta in 1943, providing some 28,000 jobs, heralded a new era in the history of Cobb County and Smyrna. Here we see the family of long-time Smyrna City Council member Roy Wood being shown through the facility by Bell Aircraft Company President Larry Bell in 1944. The young man in the front row left hand side of the photograph, the late Charles “Pete” Wood, would himself serve on the Smyrna City Council from 1991 to 2013.

Lorena Pace Pruitt served as Mayor of Smyrna from 1946 to 1948. Mrs. Pruitt, whose father and grandfather had held the office before her, enjoys the distinction of having been both Smyrna’s and the state of Georgia’s first female mayor. 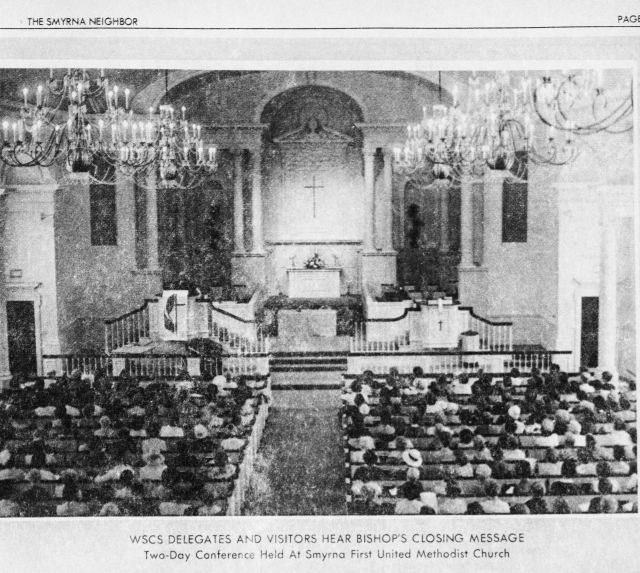 A 1947-48 photograph of first graders at the Smyrna Elementary School on King Street, with their teacher Mrs. Murphy McBrayer.

William A. Ward, real estate developer, former President of the Bantam Car Company, which developed the Jeep automobile. Ward was largely responsible for the establishment of Smyrna’s Belmont Hills Shopping Center, dating from 1954, said to be the largest shopping center in the southeastern states. Smyrna’s Ward Street was named for this influential developer.

The Belmont Hills Shopping Center, as it appeared in the 1970s.

This picture of an unidentified child in a field of jonquils appeared in a March 26, 1964 issue of the Smyrna Herald. Smyrna is, of course, known far and wide as “The Jonquil City.”

This building, which housed Smyrna’s Fire Station after 1954, stood on West Spring Street (the site of Market Village). It had originally accommodated the Pearl Springs Cannery. With the decline of the cotton economy of the area in the early years of the 20th century, many local farmers turned to the cultivation of berries and fruit. The largest peach orchard in Smyrna, comprising some 80 acres, was located just south of Spring Street. The Pearl Springs Cannery was still in operation in the early 1940s.

A December 1962 view of the Smyrna branch of Rich’s Department Store under construction in the Cobb Center Plaza on South Cobb Drive.

South Cobb Drive with its long sloping topography was a perfect location in which to hold Smyrna’s Annual Soap Box Derby. Here we see the competition underway in 1963.

Bill Miles, the editor of the Smyrna Herald, is seen here being presented with a Civitan Certificate of Appreciation in October 1963. 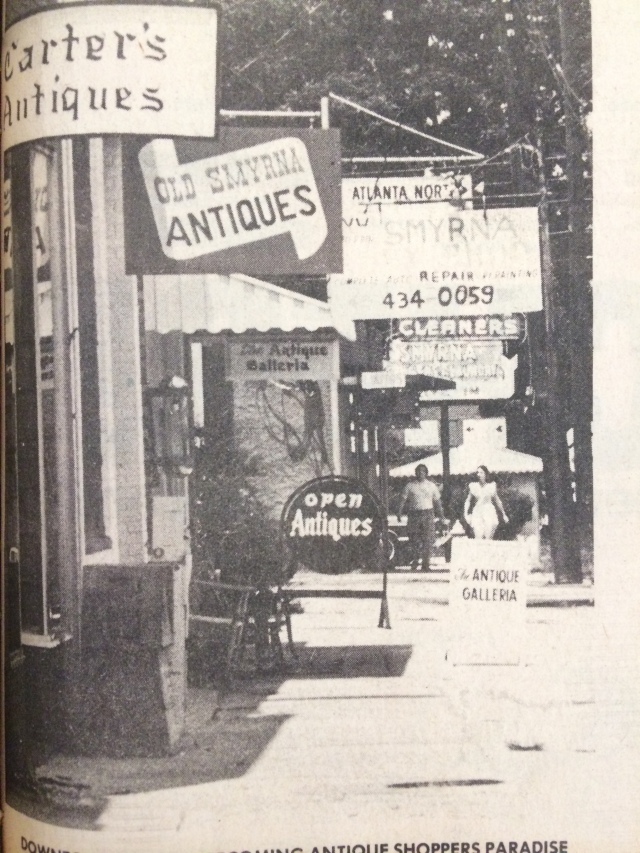 By the early 1970s, the commercial vitality of downtown Smyrna was in serious decline owing to serious traffic congestion and a dearth of parking spaces. Indicative of that decline were the number of antique shops that sprang up along Atlanta Road and adjoining streets at that date.

Smyrna acquired a hospital of its own in the early 1970s. Here we see the groundbreaking ceremony for the new facility on South Cobb Drive, now Emory Healthcare of Smyrna.