Bill Marchione: What do you recollect about transportation in your early years?

John McLane: Of course, we had the old semi-cars. Some of them turned around at Oak Square. They were a noisy streetcar. 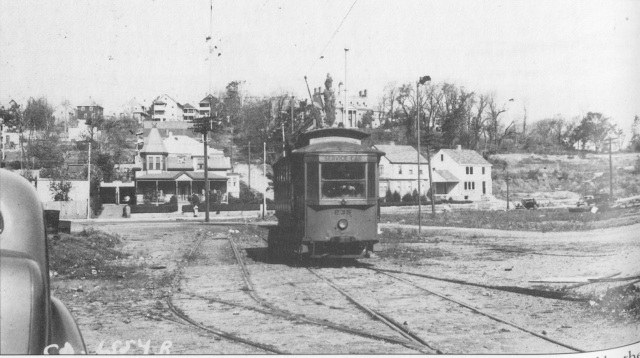 Streetcar changing directions at Oak Square, Brighton, with Faneuil Street and Bigelow Hill in the background

I’ve seen a lot of pictures of old streetcars but never the one that went down Market Street. It would stay at the corner of Market and Washington Street. When we were kids my brother sold newspapers at the corner of North Beacon and Market Streets and we would get the newspapers in back of Picone’s Drugstore on Academy Hill Road. The Raffertys were in charge. We’d get the newspapers there, and then board this streetcar and go down the hill past St. Columbkille’s to North Beacon Street. This car had only one set of [wheels] on it and it didn’t have air breaks. It had the old brake that the motorman had to keep turning and turning and turning until it would catch on the links, and that’s the way he’d stop it. And then he’d kick it and that would loosen up the chain, and release the brakes. We’d get our free rides down there. The paper was then two pennies.

There was a streetcar that ran along North Beacon Street at the time that ran out to the Watertown Arsenal. That was during World War I, and it evidently carried workers to the (Watertown) Arsenal.

BM: In the Brighton-Allston Historical Society collection we have photographs showing streetcars crossing the old wooden North Beacon Street Bridge, and also streetcars on Western Avenue near the Arsenal Street Bridge, but we don’t have pictures of the streetcar you mention as operating along Market Street.

JM: This particular line would go down Market Street, turn right on Western Avenue, and as I understand it, would go on to Central Square.

But what impressed me about this streetcar was the big brass handle that the motorman had to keep turning to stop, whereas later on, cars were equipped with Westinghouse air brakes. 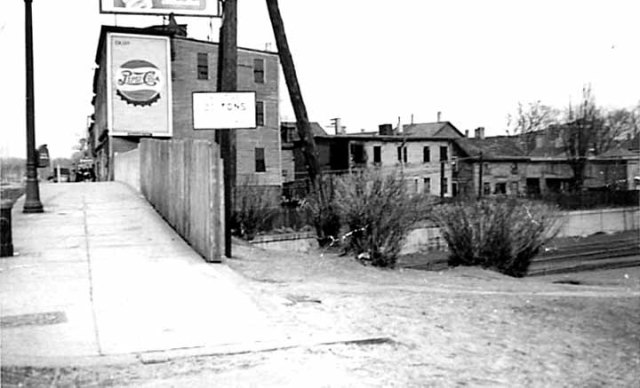 The section of Market Street north of the Lincoln Street intersection, where many of the bar rooms that Mr. McLane refers to were concentrated. These drinking establishments accommodated the workers at the nearby Brighton Abattoir and Stockyards.

Another feature of Allston-Brighton in that period is that there were bar rooms everywhere! I’ll never forget them. You know where the BFI place was until recently [at the northeast corner of Market and North Beacon Streets]? Well, there was a bar room there. On the right hand side of Market Street there must have been a dozen more. Until just a few years ago some of those big brass rails that were in front of bar rooms were still in front of these buildings.

Speaking of bar rooms, when we first moved here [15-17 Gordon Street in 1922], in the barn was a great big case measuring about eight feet high by twenty feet long which came from the Centennial House, which was the hotel that had stood next door [on the site of the Brighton Avenue Baptist Church]. No one was allowed to see what was in that case! Father let them keep the case in our barn until it could be moved. It was evidently one of those [nude] murals that hung over a bar.

BM: I see. Not fit for innocent eyes to see. When did the Centennial House come down?

JM: There was a fire. I would say it was about 1915 or so, but I’m not absolutely sure of the date. When we moved here the outline of the foundation was quite defined. 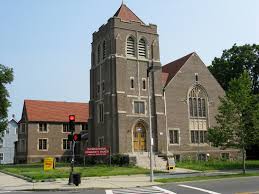 The Centennial House Hotel, presumably established in 1876, on the nation’s hundredth anniversary, occupied the lot that now accommodates the Brighton Avenue Baptist Church, dating from the 1930s. No picture of this hotel is known to exist. The barn referred to by Mr. McLane was located to the rear of the hotel on Gordon Street, on the property that the McLane family acquired about 1922.

JM: Yes, Centennial Walsh. [The hotel dated from 1876, the national Centennial—thus its name of the hotel and its proprietor]. My father bought our house from the Walsh family.

BM: Did he live in the house? 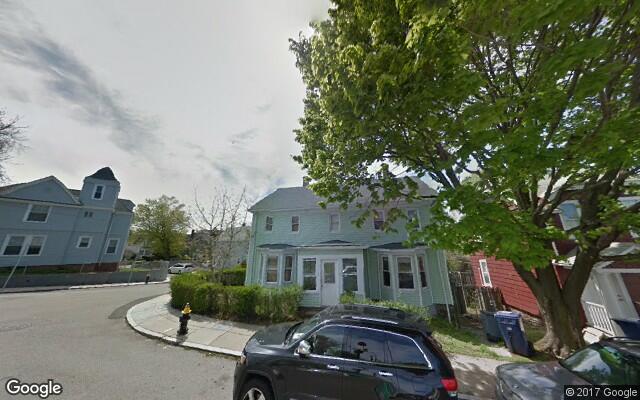 BM: Now that’s the barn that John L. Sullivan is said to have trained in?

JM: Now that’s an interesting story. There was a man named Hobart Turner, a police officer, who lived in this neighborhood somewhere. He was the one who told me when I was quite young that John L. Sullivan and Centennial Walsh were very close. John L. Sullivan did a lot of his drinking in Brighton. In fact, Hobart Turner told us about how many times John L. would be locked up in the Brighton police station.

BM: I ran across an article in old Brighton Item some time ago, describing how the great fighter was arrested on one occasion near the corner of Lake and Washington Streets for driving a team recklessly while under the influence. 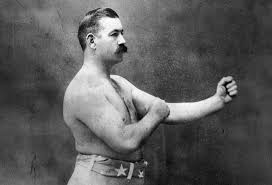 World Heavyweight Boxing champion John L. Sullivan (1858-1918) trained in a barn behind the Centennial House Hotel on Gordon Street in Allston, probably in the 1880s. Sullivan held the world heavyweight title from 1882 to 1892.

JM: Apparently, Centennial Walsh’s son was quite a sports enthusiast. The exercise equipment we found in the barn included a circa 1900 football helmet, dumbells, a big, solid punching bag, all sorts of paraphenalia—Indian clubs, weights, anything associated with sports and exercise. So apparently, John L. Sullivan would come over and train in the barn. Hobart Turner is the one who told me about it.

BM: Apropos of athletics, you loaned the Brighton-Allston Historical Society a photograph recently of three young men in YMCA baseball outfits, members of a local team, dating from about 1900, one of them being your uncle, which the Historical Society copied to go into a display in the foyer of the new YMCA building in Oak Square. What can you tell us about the men that appear in that photo? 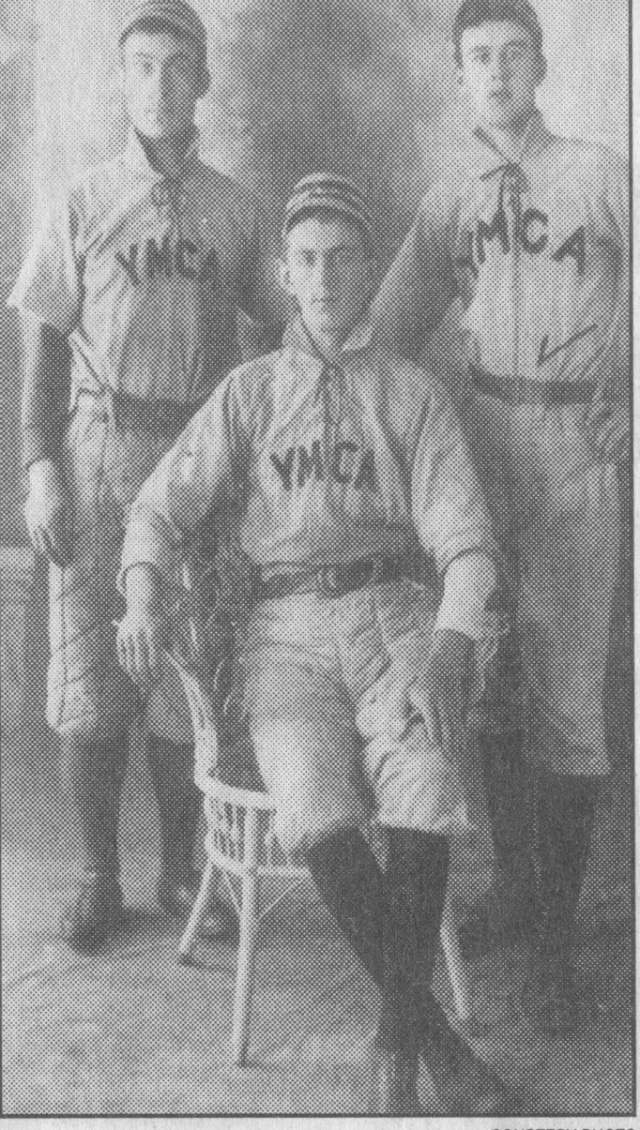 Members of a YMCA baseball team.  The player on the right is Eddie McLane, John McLane’s nephew. All three of these young men became professional baseball players.

JM: They were all local boys, and all three went on to play professional ball. Charlie Hasset and Jim Cross played in the Pacific Coast League while my uncle, Eddie McLane, played in the Eastern League, and was the manager of the Brockton Team.

BM: How about the Charles River? Do you have any recollections of going down to the river to swim? 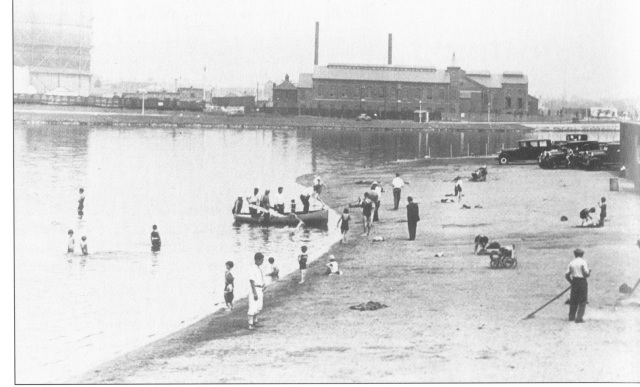 Magazine Beach in Cambridge, and the Boston Consolidated Gas Company building and gas tanks across the Charles River on lower Cambridge Street in Allston.

JM: Indeed, I do. How the people in lower Allston ever put up with the degradation of the railroad and the gas company I’ll never understand. Are you cognizant of the fact that there were gas tanks on lower Cambridge Street? They would go up and down as the gas was being used. They were in a marsh and they sort of floated.

And then across the street were the roundhouses. And they’d keep the engines going and soft coal smoke would come across from there. When you’d get the streetcar to go to Magazine Beach it crossed the river on a wooden bridge [the River Street Bridge], a draw bridge. It was a rickety bridge. We used to think we were going to fall in.

BM: So you used to swim at Magazine Beach?

JM: Yes, but I suspect that it wasn’t the best, even then.

The massive and odiferous Brighton Abattoir

Map of the Brighton Abattoir, the headquarters of the Butcher’s Slaughtering and Melting Association, fourteen separate slaughterhouses under one roof, located on the south shore of the Charles River in North Brighton.

BM: How about the Brighton Abattoir? Did you ever get down there?

JM: Oh, sure. The smell of the Abattoir! They used to say that they were “rendering” over at the Abattoir. With the northwest wind blowing, it was something brutal! I remember going down, and there was blood, and the big men with the aprons on, slaughterings cows, and pigs, and horses. And I saw them shoot a horse. They lined up the horse along a wall. And this guy shot him, and they lifted the horse up. I’ll never forget it. 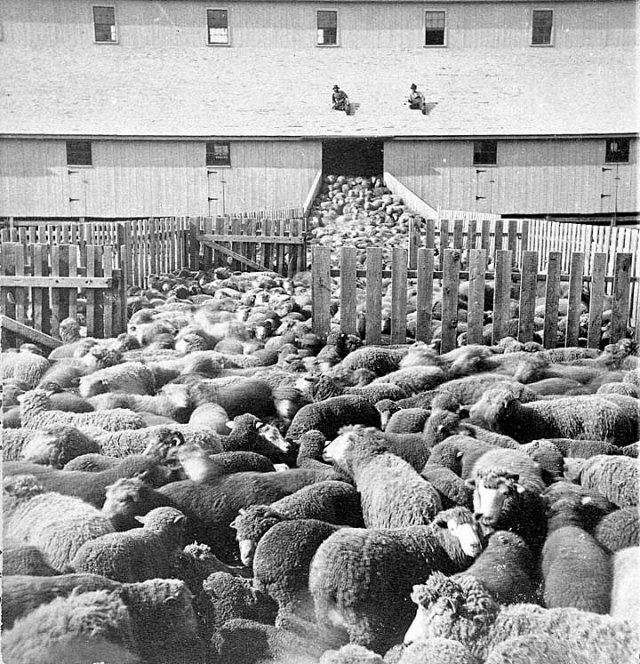 The Sheep Shed at the Brighton Stockyards, located on the north side of North Beacon Street in North Brighton. Livestock often escaped from the stockyards and had to be rounded up by the local police force, popularly referred to as Brighton’s “Cowboy Cops.” Long term residents have recounted being chased through the streets by livestock. The Abattoir and stockyards went out of business in the late 1950s and early 1960s.

I was driving down just the other day, along Life and Guest Streets. That used to be Buffalo Avenue in my day. But when the bakery came in there they named the streets after their bread—there was Life bread and Guest bread. As I say, I was just driving down there, and thought how nice it is to have swapped the Abattoir and Stockyards for what’s in there now, the new Brighton Landing development. 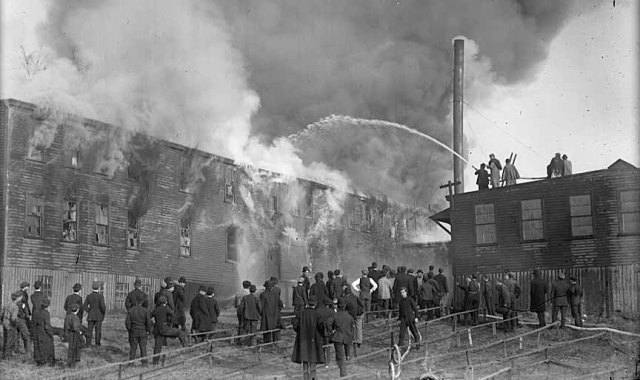 Fires frequently broke our at the Abattoir and Stockyards.  Here we see the Boston Fire Department trying to control a fire at the Stockyards, probably in the 1920s.

BM: How about fires at the Abattoir and Stockyards? I understand there were quite a few fires that broke out there over the years. (As a long-term Boston fire fighter John McLane had no doubt participated in dousing some of these fires).

JM: Oh, yes. I’ll never forget, we were selling newspapers down there one afternoon, at the corner of North Beacon and Market Street, and there was a fire. And the fire went right through these wooden, slatted pens—probably 20 by 20 feet—and that was one of many brutal fires down there.

And, of course, everyone tells you about the Abattoir whistle, the “Brighton Bull.” When World War I ended [November 1918] they blew the whistle, and blew it, and blew it, and blew it. Communications in the early times were pretty primitive. At election time, for example, there being no radio and very little telephone, they would sweep the sky with a search light to tell you which candidate had won. Candidate A would be represented by one circle of the search light, candidate B by two circles, and so forth. That was the way they told you who was ahead. It was extremely difficult to interpret! 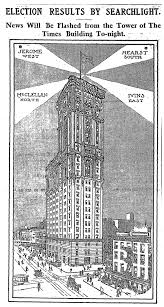 Broadcasting election results by search light in the pre electronic age, in this case from the roof of the New York Times Building in New York City.