This article made its first appearance in the Boston Tab newspaper on February 9th 2001, and subsequently appeared in my collection of Boston history essays, Boston Miscellany: An Essential History of the Hub (History Press, 2008). I offer it again here, accompanied by many additional  illustrations. WPM

The Chestnut Hill Reservoir originally contained two basins—the existing one, which was named for the great Boston architect and engineer Nathaniel J. Bradlee, and a somewhat smaller body of water to the immediate west, named for leading industrialist Amos Lawrence. The latter body of water was turned over to Boston College about 1950 and has since been filled in. The university’s lower campus and Alumni Stadium now occupy the site.

It is with the career of the namesake of the surviving basin—Nathaniel Jeremiah Bradlee—that this article is chiefly concerned. Though one of Boston’s leading mid-nineteenth century men of affairs, the president of the Boston Water Board at the time of the construction of the Chestnut Hill facility, and a prolific architect who designed more than five hundred Boston area buildings, Bradlee’s name is today largely forgotten. 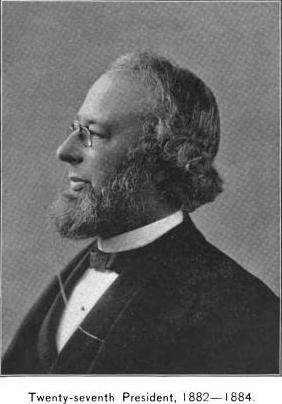 Nathaniel J. Bradlee, President of the Boston Water Board, and one of the City’s leading master builders

Nathaniel J. Bradlee was born in Boston in 1829, the son of Samuel Bradlee, a well-to-do hardware merchant, and of Elizabeth Davis, member of another prominent Boston family. His maternal grandfather, Caleb Davis, a wealthy merchant and Revolutionary-era politician, served as the first Speaker of the Massachusetts House of Representatives under the Massachusetts Constitution of 1780.

Nathaniel Bradlee grew up on Avon Place (now Avon Street) in downtown Boston , a short street that runs from Washington Street, opposite Temple Place, to nearby Chauncy Street.

In choosing civil engineering and architecture as a career, Bradlee was following in the footsteps of his paternal grandfather, another Nathaniel Bradlee, who had been a highly successful Boston builder.

Nathaniel received his education  at the well-known Chauncy Hall School, located but a stone’s throw from the family’s residence on Avon Place.

The building on the left in this photograph of Avon Place housed the Chauncy Hall School, where Bradlee received his only formal education

This was all the formal education Bradlee ever received, but it must have been thoroughgoing, especially in mathematics and drawing, for when he graduated in 1846, the seventeen year old was immediately hired as a draftsman by one of Boston’s leading architects, George Dexter, who was then at work with Edward Cabot on the landmark Boston Athenaeum building on Beacon Street.

The great Boston architect George Dexter, under whom Bradlee trained

Bradlee was quickly promoted to a full partnership, and when Dexter died in 1856, the then twenty-seven year old Bradlee succeeded him as head of the firm.

Bradlee was both a prolific and highly versatile architect. In the 1850s, his first full decade of practice, he designed three new buildings for the Boston & Lowell Railroad; a mausoleum for the pioneer industrialist Francis Cabot Lowell; a gate at the Tremont Street entrance to the Boston Common; a new edifice for the First Church of Jamaica Plain; the Trinity Church Chapel on Summer Street; several Boston school buildings; the headquarters of the Provident Institution for Savings on Tremont Place; a riding academy at the foot of Beacon Hill’s Chstnut Street; and several important commercial buildings, including the C. F. Hovey Department Store. 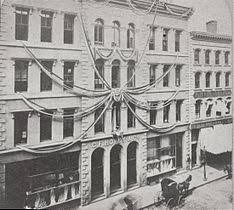 The most important early structure by Bradlee was Harvard College’s handsome Gray’s Hall, begun in 1858, the oldest of the three Victorian dormitories that still stand in the southern half of the Harvard Yard. 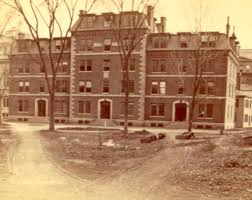 In 1856, Bradlee married Julia R. Weld, daughter of a well-to-do Baltimore merchant. They had three daughters and resided in Roxbury.

Bradlee designed many South End structures, including several elegant blocks of townhouses. Other buildings by Bradlee in that section of town included two churches of note: the Springfield Street Church, dating from 1860, and a new building on Union Park Street for Reverend Edward Everett Hale’s South Congregational Church, completed between 1872 and 1874. Bradlee also designed the landmark Cloud Hotel, situated at the corner of Union Park and Tremont Streets, a marble apartment building of the popular French flat variety.

Though Bradlee designed numerous Back Bay structures, including over twenty residences, and a headquarters for the Second Church of Boston on Boylston Street, he left less of a mark on that emergent district than on the South End and the city’s commercial area.

Bradlee also played an active part in public affairs, serving as an elected a-large member of the Boston Water Board from 1865 to 1871, the public agency that managed the city’s water supply system.

During the last three years of his service there, he was the body’s president. Under his leadership, some forty-eight miles of new pipes were laid out and water service was extended to thousands of  new homeowners and businesses. In addition, the massive Chestnut Hill Reservoir was completed in 1870, his last full year at the helm of the board. 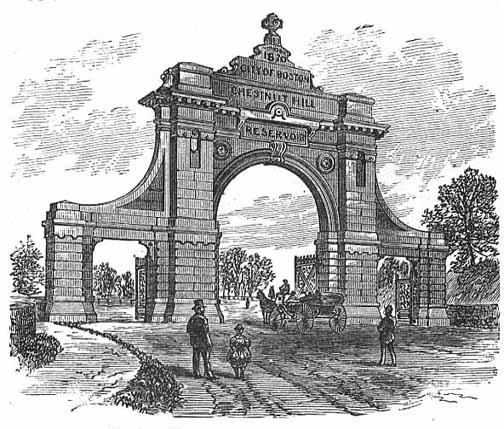 Bradlee served the water board in other ways. In 1868 he authored the first published history of Boston’s water supply system, a work entitled  A History of the Introduction of Pure Water into the City of Boston. He also designed the handsome Cochituate Standpipe, which still stands on the site of a Revolutionary War fort in Roxbury’s Highland Park. 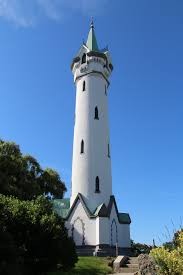 Bradlee was noted both for his cordiality and absolute honesty. When he retired from the presidency of the water board in January 1871, its members praised the able, impartial, and dignified manner in which he had always conducted the body’s meetings. His reputation for honesty was such that he was named as trustee for no less than fifty large Boston fortunes over the course of his career.

In 1869, Bradlee took up a particularly challenging civil engineering project by accepting a commission from the City of Boston to move the seven story Pelham Hotel, situated at the corner of Tremont and Boylston Streets several feet back on its lot to allow for the widening of adjacent streets. This was no small undertaking. The massive structure covered 5,200 square feet and weighed an estimated ten thousand tons!

As the Boston Globe noted of this feat, Such an undertaking was considered almost impossible…. Larger buildings had been raised but none of equal size were ever removed. Bradlee’s accomplishment attracted much favorable comment, accounts of it appearing in publications not only in the United States but in Britain, France and Germany. Later the architect-engineer also moved the Boylston Market Building.

The Boston Water Board was the only elective office Bradlee ever held, though he was a candidate for mayor in 1876, having received the Republican nomination for that office. In endorsing his candidacy, the Boston Herald noted that Bradlee was a pure and upright man who though differing from  the members of the [Republican nominating] convention on important questions of national politics, is no partisan and casts his vote as his conscience tells him. A Republican had been elected mayor of Boston the year before by a fairly comfortable margin, and given his excellent public reputation, under normal circumstances Bradlee’s prospects would have been quite good.

Unfortunately, his nomination came at an inopportune moment for the Republican Party nationally—in the midst of the highly controversial 1876 presidential election, a protracted contest that ended in the election of Rutherford B. Hayes by a margin of a single electoral vote, notwithstanding a substantial popular vote plurality for his Democratic opponent, Samuel J. Tilden.

The city’s Democratic leadership attributed Bradlee’s defeat by its candidate Frederick O. Prince to the outrageous conduct of the Republican Party throughout the country, and the express[ion of] the sentiment of an outraged people. Under more favorable circumstances, Bradlee, who lost this election by a scant 2,300 votes, would have stood a much better chance. When again nominated for the office in 1887 by an Independent Citizen’s Ticket, Bradlee who was in declining health, and thus refused the nomination.

It was as an architect and engineer, however, that Nathaniel J. Bradlee made his mark on the history of Boston, continuing to design significant buildings into the 1880s. The most notable post-1870 Bradlee structures included  the landmark New England Mutual Life Insurance Company building in Post Office Square (demolished in 1946), the Young Men’s Christian Union building on Boylston Street, dating from 1875 (now an official City of Boston landmark), and the Boston & Maine Railroad Depot in Haymarket Square.

Bradlee also designed hotels, department stores and commercial buildings in the last two decades of his career.  One notable structure was Palladio Hall in Roxbury’s Dudley Square, a property now on the National Register of Historic Places, which the architect built for himself (he was apparently considering relocating his architectural firm there, though he never did so.

Nathaniel J, Bradlee’s life was cut short in December 1888 when he suffered a fatal stroke aboard a Boston & Fitchburgh train while on a business trip to Keene, New Hampshire. He was fifty-nine years of age. With this great architect’s death, as the Boston Globe noted, the city lost one of [the] most successful men of that era. 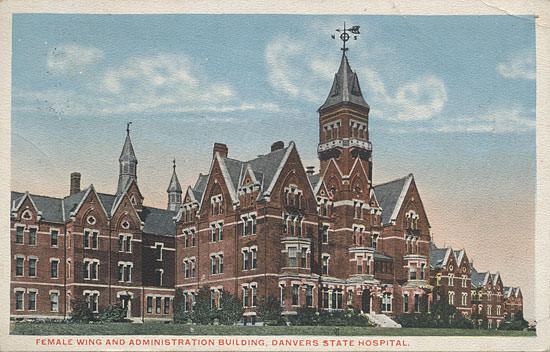 One of Bradlee’s most impressive structures, the Danvers State Hospital, was built between 1874 and 1878. Despite designation as a state historic landmark, and over the furious objections of the preservation community, this unique complex was demolished in 2007.