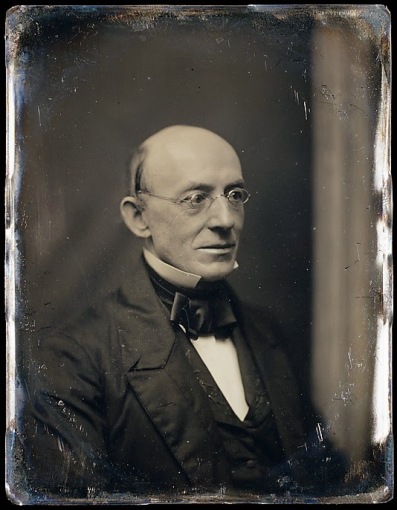 Modern Bostonians take pride in the Hub’s association with the anti-slavery crusade. It was here, we are fond of reminding outsiders, that the militantly antislavery newspaper the Liberator was founded in 1831 by radical abolitionist William Lloyd Garrison and that the most resolutely abolitionist organization in the United States, the New England Antislavery Society, was founded in 1833.

Yet in celebrating Boston’s contributions to antislavery, we should not lose sight of less creditable facets of the Hub’s relationship to the institution of slavery—a relationship going back to the earliest stages of the city’s history, the slave trade of the colonial era. And Faneuil Hall, the so-called “Cradle of Liberty,” was built with money deriving, in part, from the Faneuil family’s slave trade activities.

Most importantly, the economic well-being of nineteenth century Boston rested largely upon an industry—the manufacture of textiles—which depended upon the availability of cheap cotton from the slave south.

The insignia of the Boston Manufacturing Company. While its factory was located in Lowell, Massachusetts, this highly profitable enterprise was owned by Boston capitalists, and depended upon a ready supply of cotton from the slave states.

Thus it is hardly surprising that the abolitionist movement never enjoyed broad support here, either from the city’s business elite or from its general population.

Only a handful of Bostonians, in fact, embraced the radical program that William Lloyd Garrison and his associates of the New England (later the Massachusetts) Antislavery Society espoused. The Garrisonian abolitionists called not only for the immediate abolition of slavery, but also—and far more disturbingly—the integration of blacks into American society as equal citizens.

Racial prejudice, endemic in American society in the early nineteenth century, was as firmly entrenched in early antebellum Boston as in other parts of the nation.

Nor was Garrison particularly well placed to make a case for abolitionism in socially rigid Boston. Garrison was from Newburyport, Massachusetts where he had grown up in the direst poverty. His drunken father had abandoned his wife and family when William Lloyd was three years old. As a boy the future antislavery crusader had been forced to beg door to door for scraps of food to help keep his family from starvation.

Apprenticed to a printer, the largely self-educated Garrison soon demonstrated such talent as a writer and polemicist that he was given editorial responsibilities and began advocating a wide range of humanitarian reform—temperance, pacifism and antislavery, in particular.

By 1829, Garrison rejected the widely held view that slavery should be phased out gradually (so-called gradualism) in favor of the far more disturbing doctrine of immediatism, which held that an immoral institution should cease everywhere at once, and that if one could justify the existence of slavery for a single moment, then it might be justified indefinitely.

Garrison’s conversion to immediatism coincided with his only period of residency in the slave states. In August 1829, the young reformer had accepted the post of co-editor of the Genius of Universal Emancipation, a paper in Baltimore, Maryland, owned by the Quaker antislavery lecturer Benjamin Lundy. Preferring the lecture circuit to editing, Lundy left the management of the antislavery paper in Garrison’s hands, with perhaps predictable results.

Having used the pages of the Genius to label ship owners who engaged in the domestic slave trade as “enemies of their own species—highway robbers and murderers,” Garrison soon found himself in serious trouble with the Baltimore authorities.

Sued for libel by ship owner Francis Todd, who like Garrison was a citizen of Newburyport, the editor was found guilty by a Baltimore jury and sentenced to a brief jail term. Upon his release from prison on June 5, 1830, after seven weeks incarceration, the militant abolitionist left Baltimore for good, moving to Boston, where he would reside for the balance of his life.

Garrison experienced great difficulty in securing financial backing and subscriptions for an abolitionist paper in Boston. One or two well-connected men lent the venture enthusiastic support, notably Reverend Samuel J. May Jr. and lawyer Samuel Sewall Jr., who were both, interestingly, descendants of Samuel Sewall, the colonial-era judge who wrote the first abolitionist work published in America, The Selling of Adam (1700).

However, the vast majority of Bostonians, even such vaunted liberals as William Ellery Channing, were so put off by the extreme doctrines the militant young editor espoused that they declined to lend his venture their support and encouragement.

It was thus only with the greatest difficulty that the Liberator was finally launched on January 1, 1831. Its financial condition during the first several years of its existence was precarious in the extreme. It is significant that of the first five hundred subscribers, only 5 percent were from Boston, and most of these were residents of the city’s small black community, situated on the northern slope of Beacon Hill. Free blacks comprised the bulk of Liberator subscribers in the years that followed.

Within eight months of the foundation of the Liberator, Nat Turner’s slave rebellion broke out in Southampton County, Virginia, an uprising in which sixty white people were killed.

While there is no evidence that the rebels were aware of the existence of the Liberator—which, in any event, preached nonviolent resistance to slavery—southerners were quick to blame the massacre on Garrison and his paper.

Bostonians were equally quick to offer reassurances to their Southern brethren that the Liberator did not speak for Boston. A letter from South Carolinian Benjamin F. Hunt asking for the suppression of the paper elicited a quick response from Boston Mayor Harrison Gray Otis, who pointed out that the Liberator and its editor enjoyed “insignificant countenance and support in Boston.” And while contending that Boston hoped to see slavery eventually eliminated, “as did the best citizens of the South,” Otis asserted that “there has been displayed among us, less disposition to interfere with the actual relations of master and slave in our sister states, than has been manifested in other places.”

Garrison had complained in the very first issue of the Liberator that the antislavery crusade found “contempt more bitter, opposition more active, detraction more relentless, prejudice more stubborn, and apathy more frozen [in New England] than among the slaveholders themselves.”

When Garrison and his followers moved to establish an abolitionist society in Boston a year and a half later, they again met opposition and contempt from the city’s “gentlemen of property and standing.” 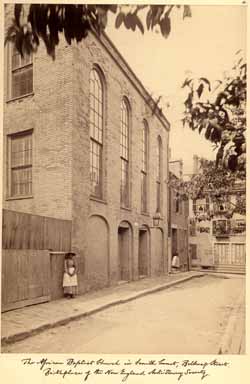 The African Meetinghouse, located in what was then Boston’s African-American neighborhood. It was here on January 30, 1832 that the New England Antislavery Society was launched.

Denied access to more ample meeting places, the organizers of the New England Antislavery Society were obliged to hold their first public gathering not in Faneuil Hall, nor at the Old South Meetinghouse, nor at the Park Street Church, nor any of the well-known and accessible meeting halls of the city, but rather in the school room under the African Baptist Church (now the African Meetinghouse) on Smith Court in Boston’s black neighborhood.

Nor did the apostolic dozen who participated in this January 6, 1833 gathering represent the first rank of Boston’s leadership. The president, Arthur Buffum, was a Quaker manufacturer of hats who would a short time later be disowned by his fellow Quakers for supporting radical abolitionism. The group’s first vice president , a man named Odiorne, is so obscure a figure that historians are unsure of his first name. The notorious Garrison assumed the post of corresponding secretary, thereby taking charge of the fow of information.

The spirit and determination that moved the organizers of the newly founded abolitionist society was expressed by Garrison as he stepped from the hall following the inaugural meeting. “We have met tonight in this obscure schoolhouse,” he declared. “Our numbers are few and our influence limited; but mark my prediction, Faneuil Hall will ere long echo with the principles we have set forth.”

One further example of the opposition Boston manifested toward abolitionism in its early years—in some respects the most dramatic—was the riot that occurred in Boston in response to a projected lecture by the British abolitionist George Thompson.

Garrison had made Thompson’s acquaintance during an 1833 trip to England. So widespread was the opposition to the Thomson lecture that the owner of Boston’s Julien Hall withdrew permission to use the facility, fearing that it would be attacked by an offended citizenry. An unfounded rumor then spread through Boston that Thompson would make an unscheduled appearance at a meeting of the Female Antislavery Society on October 21, 1835. A mob estimated at one thousand strong converged on this meeting place at 46 Washington Street, supposedly to prevent the lecture from occurring (Thompson was not even in Boston at the time) at which point Mayor Theodore Lyman and the Sheriff of Suffolk County intervened, asking the ladies to leave, which they did. 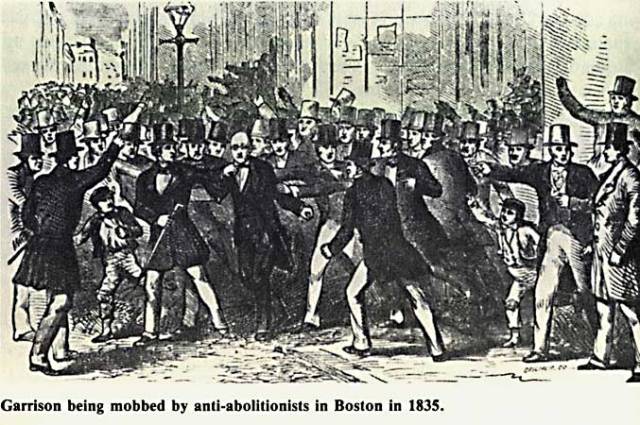 Garrison being mobbed by Boston’s “gentlemen of property and standing,” October 21, 1835

The mob, however, soon after apprehended Garrison, who had taken refuge in a nearby carpenter’s shop. They tied a rope around his waist, intending to make an example of him. Fortunately Mayor Lyman again intervened, placing the abolitionist leader under arrest “for his own safety,” and booking him for “disturbing the peace.” Garrison spent the night in jail, but the next morning had the last word on the issue of Boston’s intolerance of abolitionism by inscribing on the jailhouse wall the following inscription: “William Lloyd Garrison spent the night in jail on Wednesday afternoon October 21, 1835, to save him from the violence of ‘a respectable and influential mob,’ who sought to destroy him for preaching the abominable and dangerous doctrine that ‘all men are created equal’ and that all oppression is odious in the sight of God.” 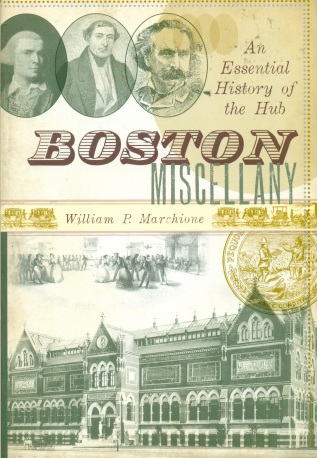 Boston Miscellany: An Essential History of the Hub

Allston-Brighton in Transition: From Cattle Town to Streetcar Suburb

In the period 1998 to 2001 I wrote regular bi-monthly historical columns for two related Boston newspapers, The Boston Tab and the Allston-Brighton Tab, a total of about a hundred columns in all. Then In 2007 and 2008 collections of these articles were published in book form, entitled Allston-Brighton in Transition: From Cattle Town to Streetcar Suburb and Boston Miscellany, An Essential History of the Hub.