Boston Miscellany: An Essential History of the Hub 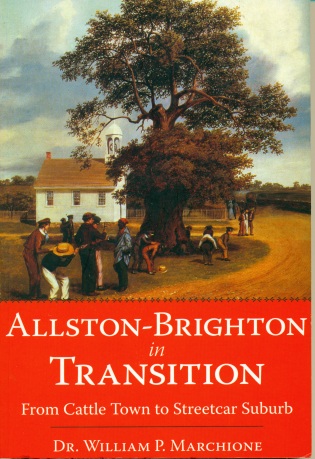 Allston-Brighton in Transition: From Cattle Town to Streetcar Suburb

In the years 1998 to 2001 I penned over 100 articles that appeared regularly on the pages of the Boston and Allston-Brighton Tab newspapers.

I will be posting a number of the more interesting and provocative of these pieces on this blog in the weeks to come. The two that follow will parallel articles in southern history that I intend to post dealing with the forced removal of the Cherokee Indians from North Georgia in the late 1830s and the intensification of southern paranoia over the slavery issue that culminated in secession and the outbreak of the civil war in 1860-61.

Sixty-five of these Tab articles appeared in book form in the 2007-08 period, Boston Miscellany: An Essential History of the Hub (History Press, 2008) and Allston-Brighton in Transition: From Cattle Town to Streetcar Suburb (History Press, 2007), the covers of which appear above.

It should be noted that the 2007 volume was published to coincide with the bicentennial of my home community of Allston-Brighton which separated from the parent community of Cambridge in 1807.